Hoi An to Vinh Moc Tunnels by car

Book the Hoi An to Vinh Moc Tunnels, you will have a chance to understand more about Vietnamese culture, customs as well as local life.

Hoi An to Vinh Moc tunnels is the safe, reliable and flexible car service. On the way, if you would like to have some coffee, lunch, our friendly driver will be happy to help you!

PRIVATE TRANSFER HOI AN TO VINH MOC TUNNELS BY CAR

Because this is the private tour to visit Vinh Moc Tunnels from Hoi An so you are the boss, you can decide the time to leave. Following your requested time, our English speaking driver will pick you up at your hotels/ homestays in Hoi An.

On the way to Vinh Moc tunnels, our friendly driver will stop at some beautiful landscapes and historic places such as

Hai Van Pass is a place where we can see the white clouds all year round, where we can capture all the masterpieces of nature like Lang Co Bay, Son Tra Peninsula, Da Nang City, Tien Sa port …

Long Hung Church – going to the South of town down highway 1A towards Hue, you will get to Long Hung Church. A catholic church was built in 1955 using reinforced concrete which is evident of the damage incurred in 1972 is still exist today.

It stands as evidence of the strength and bravery shown against the South Vietnamese and American forces. In 81 days the North Vietnamese force held the church while the Americans forces fought to get it back with grenades, machine-guns, and even rockets from warships.

Horror Highway (The street of horror) – the locals will never be forgotten because of the horrible carnage on the Vietnam Highway 1A about 10 km South of Quang Tri province.

Thousands of local people, mostly the olds, women, children and Vietnamese soldiers were killed by artillery and infantry weapons in many hours. 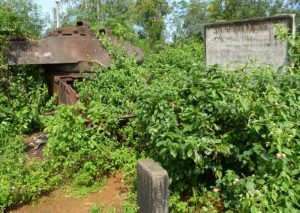 Doc Mieu Firebase –the former American base, located in the East of Highway 1A, Doc Mieu military base is located in Gio Phong- Gio Linh commune, about 7 km South of Hien Luong Bridge. Doc Mieu is a basalt soil hill located in an area of ​​three sloping terrains. As early as 1947, to proclaim the National Highway 1A, the French Army set up a military base here called Ba Doc post.

Vinh Moc Tunnels– (Vinh Moc hamlet, Kim Thach commune, Vinh Linh district, Quang Tri province) is a military-civilian work during the Vietnam War of the Democratic Republic of Vietnam against the attacks of from the Republic of Vietnam and the United States of America. The tunnel system existed in the north of Ben Hai River and Hien Luong bridge during the years from 1965 to 1972. 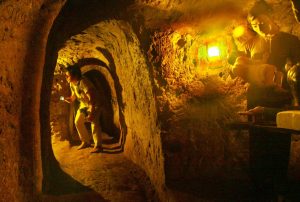 To make sure that hundreds of people can eat, live safely and conveniently, along the tunnels, a lot of houses are built, each family house has enough space for 3 to 4 people. Inside the tunnel, there are three freshwater wells, a meeting room (with a capacity of 50 people), a clinic, maternity home, telephone station, surgery, Hoang Cam kitchen, rice storage, etc.

After all, our experienced driver will drive you back safely to your hotel/homestays in Hoi An, the trip ends. Best Hue City Tour Travel hope you have a great Hoi An To DMZ tour with us!

Hoi An to Vinh Moc Tunnels by car price table

Baby seats are available upon request!

We also can customize the tours/ transfers following your ideas, your request.

Not only provide Hoi An to Vinh Moc Tunnels By Car, but Best Hue City Tour Travel also provide the best tours in Hoi An such as Hoi An Walking Tour 1 Day, Hoi An to Da Nang Transfer, Hoi An To Hue By Car, Hoi An To Phong Nha By Car, Hoi An to My Lai By Car; Hoi An To Dong Hoi by private car, Hoi An To My Son Sanctuary By Car etc. Your happiness is our highest target.

Private car Danang to Ba Na Hills with an English speaking driver is the fastest,...

Hoi An to Quy Nhon by car

Hoi An to Quy Nhon by private car is a safe, reliable and flexible car...

Hoi An to Nha Trang by car

Hoi An to Nha Trang by private car is the safe, reliable and flexible car...